Bosch announces emissions breakthrough that could save diesel 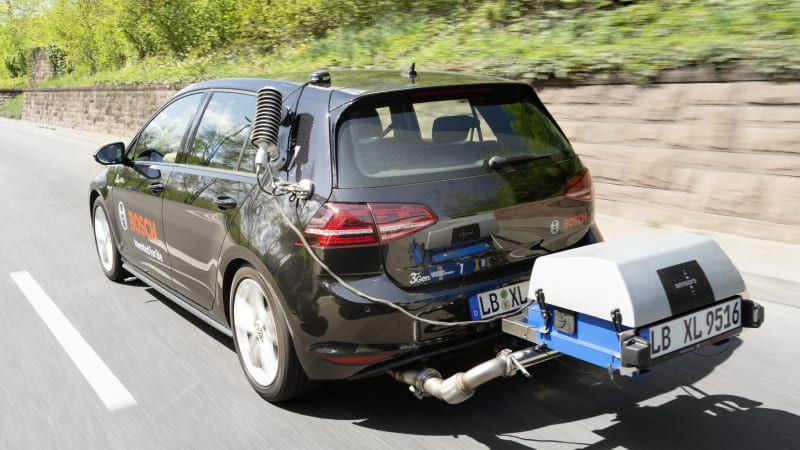 Global auto supplier Robert Bosch GmbH says it has developed a new diesel-exhaust management system that can slash emissions of smog-forming gases far below strict new limits set for Europe in 2020, saving automakers from potential urban driving bans - and maybe saving the diesel engine itself.Bosch says its technology uses a combination of advanced fuel injection, a newly developed airflow management system to recirculate exhaust gases, and intelligent temperature management, and it requires no additional new components. It says the technology drops nitrogen oxide emissions to one-tenth of the amount set under the stricter 2020 limits for Europe, even in real-world driving conditions. Bosch says the results hold consistent regardless of driving conditions, weather or how aggressively the vehicle is driven.Speaking at the company's annual news conference outside Stuttgart, CEO Volkmar Denner said the solution is available now and can be incorporated into production vehicles without adding significant cost."Combustion engines - whether powered by diesel or gasoline - will soon emit so little in the way of particulates and nitrogen oxides that they will have no significant impact on the air," he said, according to a transcript of his prepared remarks. "For anyone with a pragmatic, non-ideological interest in improving the air in our cities, diesel engines and their further technological development will obviously be part of the solution."After this ecological rehabilitation, diesel can take off again. It is not combustion engines that are being made obsolete, but rather the debate about their imminent demise."Bosch is the biggest supplier of diesel engine technology to automakers including Volkswagen,General Motors and Fiat Chrysler. It has been fighting the negative publicity and falling market share in the wake of VW's 2015 dieselgate emissions-cheating scandal that has cities including Paris and London considering driving bans to improve air quality. The company has also found itself targetedby German authorities investigating whether it aided and abetted the emissions-cheating scheme.Denner said Bosch fully cooperates with the authorities, and he called for more transparency in emission tests for cars with combustion engines and electric powertrains, including a renewed focus on CO2 emissions. He said Bosch is prohibiting technology that recognizes test cycles and optimizes accordingly, Bloomberg reports.It's the latest evidence that despite the expanding rush to electrify vehicles, automakers still see a role for ever-more-efficient combustion engines in reducing emissions and meeting tougher fuel-economy and climate-change regulations. Mazda, for example, is developing its Skyactiv-X engine based on compression-ignition technology, while Infiniti has its new variable-compression-ratio, or VC-T, a small turbocharged engine that can vary compression ratios inside the valves to maximize efficiency.
BY: AUTOBLOG.COM
Posted by redline auto sales at 14:00 No comments:

From an array of blazing colors and digital dials that perform multiple functions to an in-floor storage bin that can be used to both measure and preserve caught fish, this year's Wards 10 Best Interiors winners make it clear automakers are treating passenger compartments more like dazzling concepts than mainstream production cars and trucks.

This year's competition saw 40 nominated interiors that were all-new or significantly improved from the prior year, and even some of the vehicles that didn't make the list pushed boundaries with regard to style, materials and colors.

Red was extremely popular this year, not only as an accent color but covering complete seats and wide swaths of door panels on five vehicles in the competition - six if the burgundy-red Lincoln Navigator is included.

BY: WARDSAUTO.COM
Posted by redline auto sales at 11:13 No comments:

When Marketing Luxury Vehicles, ‘Electric’ is No Longer a Bad Word

Posted by redline auto sales at 15:16 No comments:

Lamborghini's new $200,000 SUV is more popular than expected - with one New York dealer saying he expects to sell out of his orders as soon as they arrive.

Brian Miller, President of Manhattan Motorcars, which sells Lamborghini and other luxury brands, said he already has orders for 60 Urus SUVs even though the vehicle doesn't start arriving until December. He said he plans to get about 100 vehicles in total.
"I'm sure they will all be sold," he said in an interview at the New York Auto Show. "It's very popular."
Miller said his average selling price for the Urus, with options and customizations, is around $225,000.
What's even more surprising than the demand for the world's most expensive SUV, however, is who's buying it. Lamborghini CEO Stefano Domenicali said 70% of Urus buyers have never owned a Lamborghini.
One reason for the first-time-buyer surge is that wealthy car enthusiasts who live in cities or countries with bad roads couldn't drive Lamborghini's low-slung sports cars without ruining them. The higher-sitting Urus has Lambo's signature power, engine sound and bold angles but can easily glide over potholes, dirt and steep bumps.
Miller said the typical Urus buyer is also wealthier client than the traditional Lambo buyer.
"Lamborghini has always been a brand that many people stretch to get into," he said. "We had a lot of younger people and it wasn't the big money people we would have loved to see. I think the Urus is bringing a lot of those people."
The Urus is the most radical change to Lamborghini in decades, eventually doubling the company's annual production. Domenicali said the company will end 2018 with a total production of around 5,000 cars - more than 1,000 of which will be the Urus. By the end of 2019, the SUV will account for more than half of Lambo's anticipated production of 8,000 cars.
Posted by redline auto sales at 07:22 No comments:

Ride-Hailing Firms: Will Automated Vehicles Make Them Profitable, or Will They Create Other Challenges?

There is no denying the ride-hailing business-led by Uber and Lyft-has experienced lightning-fast adoption and a massive effect on traditional modes of transportation. The number of people using ride-hailing services, and the number of ride-hailing trips, continues to grow.
That said, it's equally undeniable that ride-hailing companies have been racking up substantial financial losses. Uber, which has never recorded an annual profit, lost $2.8 billion in 2016, and another $4.5 billion 2017, according to published reports. Lyft, which is estimated to account for about 20-25% of ride-hailing revenues in the United States, reportedly lost $600 million in 2016, and another $600 million in 2017.
While it's not clear exactly where the bulk of Uber and Lyft's losses are incurred-neither is required to publicly publish their financials-industry experts attribute most of the losses to two causes.
First, Uber and Lyft have been busy buying market share, subsidizing the cost of rides to build a stable customer base, and a recurring future revenue stream. Recently, one industry publication estimated Uber customers are paying for only 41% of the overall cost of a ride, while the company (and its investors) are paying the rest.
The second major obstacle to profits is the cost of paying ride-hailing drivers. Again, while firm figures are not publicly available, it is estimated 65-75% of ride-hailing revenues go to the drivers, with the remainder going to the ride-hailing companies. The estimated gross revenue (i.e., total ride-hailing receipts) and net revenue (total revenue received, minus payments to ride-hailing drivers, plus refunds, etc.) recorded by Uber and Lyft bears this out in the chart below. These appear to confirm the bulk of revenues are not going to the ride-hailing companies themselves.
Uber and Lyft, Estimated Gross Booking Revenue/Net Revenues by Year*

*Estimates based on published sources, including Business Insider, Bloomberg, Crunchbase, Future Advisor, and Forbes.
While ride-hailing companies have been tinkering with different solutions to narrow their losses and eventually swing to profitability (e.g., pre-sales, bulk sales, lower pay for drivers), perhaps the most frequently mentioned solution is the elimination of drivers altogether. This would mean a wholesale changeover to automated vehicles. The reasoning is that if the driver cost can be eliminated from the equation, the profitability of ride-hailing companies will skyrocket.
At first blush, automated vehicles sound like an exciting solution to a vexing financial challenge for the industry. But has this scenario been completely thought through?
While drivers are certainly a major cost center, they also deliver critical services besides simply acting as chauffeurs to ride-hailing customers. For example, ride-hailing drivers:
Transitioning to automated vehicles would eliminate the need to pay drivers, but it could potentially create a slew of other logistical challenges and questions. Would ride-hailing companies, for example, be willing to buy, register and insure their own fleet of vehicles (numbering in perhaps the tens of thousands, hundreds of thousands or even millions of vehicles)? Who would refuel, maintain and make sure the vehicles remain clean, especially if a passenger left trash in the vehicle? Where would these vehicles be kept when not in use-and wouldn't that require storage and security costs?
There is a reason that certain industries prefer to work with independent franchisees to sell and service their products and services. Individuals, especially if they are invested in a company, tend to take better care of their products, customers, and employees than large entities where the individual ultimately responsible the success or failure of the enterprise is far removed from paying customers.
Given this reality, ride-hailing companies that use automated vehicles might eventually opt to franchise their operations, in which franchisees are responsible for the overall administration and operation of their fleets. Or perhaps a three-way ride-hailing service company emerges-one in which an automaker provides the automated vehicles, a ride-hailing company attracts and manages customers, and a service company (like a rental vehicle company) maintains and secures the vehicles when they are not in use.
Whatever outcome emerges, it seems clear that simply eliminating drivers and transitioning to automated vehicles will not suddenly make ride-hailing companies immensely profitable. A lot more thought and planning-about how to manage automated vehicle fleets and how much that will cost-will have to be addressed before driverless ride-hailing companies can become a super-profitable reality.
BY: J.D.POWER
Posted by redline auto sales at 12:10 No comments: